The Lobby at the Peninsula Provides Proper Fortification before an Evening with Kanye! 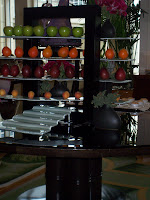 After a couple of hours of jeans shopping, Kirstoner and I needed to relax and reenergize before Kanye's Glow in the Dark Concert. We arrived in the Lobby of the Peninsula at around 5:15, they told us we could order from any of their menus - lunch, dinner, or tea. As you can see, the Lobby is a feast for the eyes. We both chose the Lunch menu. Of course, the first thing I ordered was an iced tea! 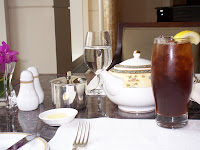 I picked the Peninsula Lobster Cobb salad and K selected the the Truffled Kobe burger with Stilton Cheese and fries with truffle aioli. 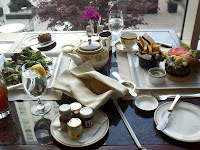 The food tasted as good as it looks! And additional iced teas were provided without request; it doesn't get any better than that!

During our meal, a cellist and violinist performed. The Lobby in the Peninsula Hotel is a paradise amidst the many shopping opportunities down below in the Streeterville and Gold Coast neighborhoods of Chicago.

The Lobby in the Peninsula Chicago gets

out of 3 glasses of iced tea

Lobbying is done with the support of the better and actual terms for the humans. The norm has been invited for the use of the term paper writing service in the ambit for the flow of the products and ideals for the humans.

most of them use this product. playstation store generator

Nice Post! This is a lovely post. I like this topic.This site has lots of advantage.I found many interesting things from this site. It helps me in many ways.Thanks for posting this again picbear