I would never cheat on Manolo Blahnik

In 1988, when my parents would visit New York from Chicago, they would always visit the Manolo Blahnik boutique during their sale. Back in the day, sale shoes would cost anywhere from $50.00 to $100.00, quite a deal even back then. So twice a year, I would head to MB to see what I could find; there was always something to be found! I don't think I ever left empty handed. 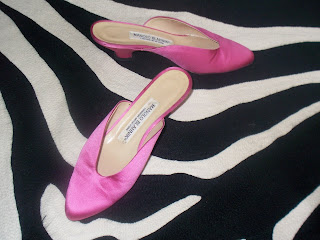 But with the pair I got married in, it's a different story. Last year, I read that Manolo Blahnik was coming to Bergdorf Goodman. I thought, wow, I would love it if he would draw something on my wedding shoes. I had seen his illustrations, and thought they were quite beautiful. So with shoes in hand, I visited Bergdorf's. I couldn't believe the line of people waiting to see this amazing man. There was a band; hors d' oeuvres were being served. It was a real scene! I became quite nervous. I thought he's not going to take the time out to sign and draw on shoes that are 18 years old while everyone else is having him sign brand new pairs, and copies of his then new book. I'm glad I was wrong; he couldn't have been more gracious.

When I showed Mr. Blahnik my shoes, he became very nostalgic. He told me they were one of his favorite styles, and he was thinking about doing something like it again. They also reminded him of shoes he designed for Sofia Coppola's Marie Antoinette.

When I asked him to draw on my shoes, he turned one over to sign the bottom. I said, "No,no, I want you to draw on the shoe". He thought that by writing on them, he could/would ruin them, but I knew this could/would never happen. 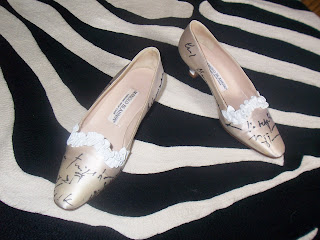 Well, then he got excited about this assignment. He asked me how long I had been married. On one shoe he wished me many more years of happiness in my marriage, and on the other shoe he wrote, in French, a sentiment relating to Marie Antoinette. He really took his time to consider what would be meaningful, and it didn't seem to phase him that there was still a long line behind me. 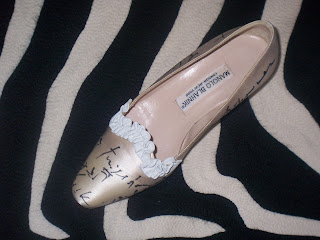 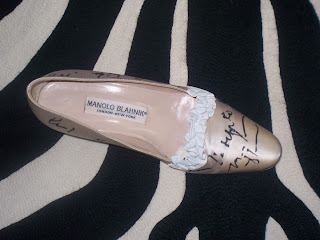 Now, there is nothing Jimmy Choo can do to make me even look in his direction.

I had to watch it twice.