Coverage of Krom's Hat at the "Hat Lunch"

New York Social Diary's coverage of the event begins with, "It was a perfect day for the biggest social event in New York's Spring season – the 28th annual Frederick Law Olmsted Awards Luncheon in the Conservatory Garden of Central Park at 105th Street and Fifth Avenue".

And ends with, "With over a thousand attending yesterday, it is impossible to list all of the prominent and socially active New Yorkers who attended, although both JH and I were there with our Digitals taking in as much for you to see as time would allow, and many of the faces are those you’ve seen many times on the Pages of NYSD over the years. It was a good time and for a good cause".

Krom with the Apparently Prominent 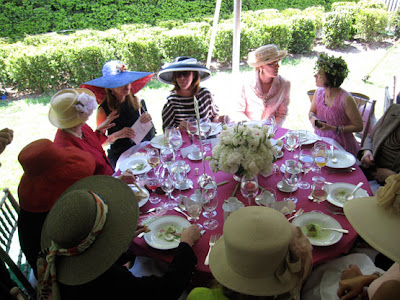 Unfortunately, my hat did not land in Bill Cunningham's On the Street column. But having a goal is essential, isn't it?

When in Rome, do as the Romans, but with a twist. Put your stamp on it.

Love it! Lovely pix of you at the table.